· Separated ability for backwards to forwards pivot for ‘with puck' and ‘without puck' and made it quicker to pivot without the puck.

· Poke checking - fixed bug causing players to always miss to the same side of the puck.

· Goalies will be more aware of shots right off a faceoff in the offensive zone.

· Goalies will have a harder time dealing with screens.

· Ability to tune shooting back against the grain so it can be less accurate/effective than shooting with your weight behind the shot and moving towards your shooting direction.

· Ability for players to be more susceptible to lose the puck when getting hit while skating backwards with the puck at speed.

· Prevented desperation shots from knocking the puck away from the goalie minimizing the strategy of diving at the goalie to knock the puck loose.

· Fixed shootout logic in GM Connected to include both locked and unlocked users.

· Allowed BAP games to resume from simulation in the middle of a shift (fixed crash when sim intervening).

· Goalie has a better chance of squaring up to shots from far out.

· Improved AI behavior against a back skating puck carrier.

· Fixed AI players occasionally standing around looking at the puck when resuming from simulation in BAP.

· Fixed BAP being taken off the ice after a short shift that results in a stoppage.

· Fixed rapidly spinning players in BAP when resuming from simulation.

· Ability to tune players puck control coming out of a 45 glide deke.

· Improved puck hop behavior when it hits the boards.

· Pokechecking effectiveness range tweaked. Players with better stick checking skill will stand out more compared to players with lover ratings in that category.

· Tuned goalies and shooting accuracy to ensure shots in the slot/middle of the ice are more effective than shots from sharp angles.

· Reduces frame rate jitter on the Xbox 360 as experienced by a number of players in all game modes but was most noticeable in OTP/EASHL (XBOX).

· Commentary for replays won't continue if a replay has been skipped.

· Flag holders in the Winter Classic stadium now stand correctly at all corners of the flag.

· Transition wipes should no longer hold on white frame longer than necessary.

· Rare occurrence of skate spray not lining up correctly with action now fixed inside of the Action Tracker.

· Shuffling of NIS' has been improved. Less chance of seeing the same NIS inside of the same game.

· Goalie stick mirroring has been corrected. Blade will now be pointing in the right direction during shootout NIS'.

· Calgary Flames now have proper logos on helmet for both Home/Away.

· Prevented replay speech from playing over top a fight or if goof off is skipped.

· Addressed an issue where some users were not getting Puck rewards for playing games and would sometimes get a Loss for actually winning games.

· Fixed an issue where players would continue to receive the Happy Hour bonus if they never disconnect from the EA servers and continued to play HUT games.

· Fixed an issue where after playing a game against the Team of the Week or a team from the Leaderboards screen, the wrong roster would be downloaded for all of the teams in the EAUHL 24/7 league when playing a Single Player game.

· Fixed an issue where players would see an error message with missing text when bidding on the same item over and over until while being out bided by another player.

· Applied training boosts are no longer used up for players in the user's Scratched Roster.

· If user has a Stanley Cup edition item in their starting lineup, they are no longer able to add that same player from the New Items screen, thus resulting in them having 2 of the same players in their lineup.

· Fixed an issue where users are not getting wins for opponent DNFs when playing Online Tournaments against the same opponent twice.

· Fixed a crash that occurred when a player enters the Watch list and highlights a sold (green outline) item.

· Fixed the crash issue when applying Consumable items to some of the players in the New Items screen.

· Addressed an issue where spamming in and out of a challenge team game will cause a blank lineup screen to appear.

· Fixed an issue where users would advance through tournament rounds by entering the tournament tree and then playing through a regular non-tournament game (online and offline).

· Fixed an issue where the player's BAP team would not sign FA's or RFA's to contracts.

· New - Trade messaging has been added to the mode.

· Improved responsiveness when scrolling through the Main Menu to reduce accidently scrolling past the option players want to select.

· Improved scrolling when looking to selecting a team on the trade player screen and select team screen.

· Users should no longer be able to adjust the gameplay sliders during a CPU game.

· Fixed an issue that would sometimes cause a crash when bringing up the player list on the Trade Player screen.

· Fixed an issue where the game would sometimes crash while backing out of the mailbox screen.

· Fixed an issue that could cause the game to crash while loading into the GM Connected HUB.

· Fixed a rare crash that could occur when proposing a trade to a CPU team (also fixed in Be-A-GM).

• Addressed an issue where team members from different regions could not match up together in a club practice and the matchmaking would fail as a result.

• Fixed PS3 microphone fluctuations when not set in HQ mode.

• Resolved an issue with EASHL matchmaking where it was returning the captain's versus skill level instead of the club's skill level. This will improve the accuracy of matchmaking.

• Addressed an issue where Hockey Shop Boosts were being unequipped to the player's EASHL Pro upon reboot of their console.

Have i ever told you about the definition of insanity? 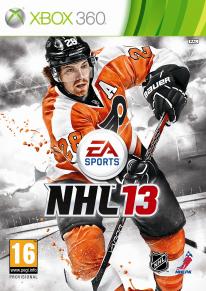